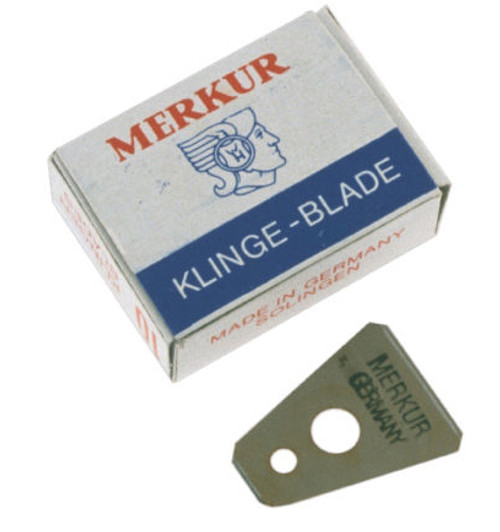 A BRIEF HISTORY OF MERKUR/SOLINGEN Merkur/Solingen was founded in 1896 by Emil Hermes but, because there are already other cutlery companies in Solingen with the name of Hermes, he registers the brand name as MERKUR, the Roman equivalent of the messenger of the gods, Hermes. The first razors for wet shaving already featured a safety comb, into which was clipped a removable wedge-shaped blade. Shortened to 4 cm, it was similar in form to a classic straight razor blade. However, it needed to be regularly sharpened. At the beginning of the 20th century, production began on very sharp, double edge razor blades, similar to those produced today. They reduced the risk of injury and when they were blunt they were cheap to replace. Over the years, MERKUR patented several of its models. The double edge blade razors were stamped with åäÌÝÌMade in SolingenåäÌÝå and åäÌÝÌGermanyåäÌÝå. As a very classic product, the razoråäÌÝå»s design, packaging and advertising still reflect the tastes of the past. In 1996 the company is sold to MerkuråäÌÝå»s biggest client DOVO/Solingen. Since then the traditional production of double edge blade razors carrying the brand name MERKUR continues under the same roof as the equally traditional production of straight razor from DOVO/Solingen.